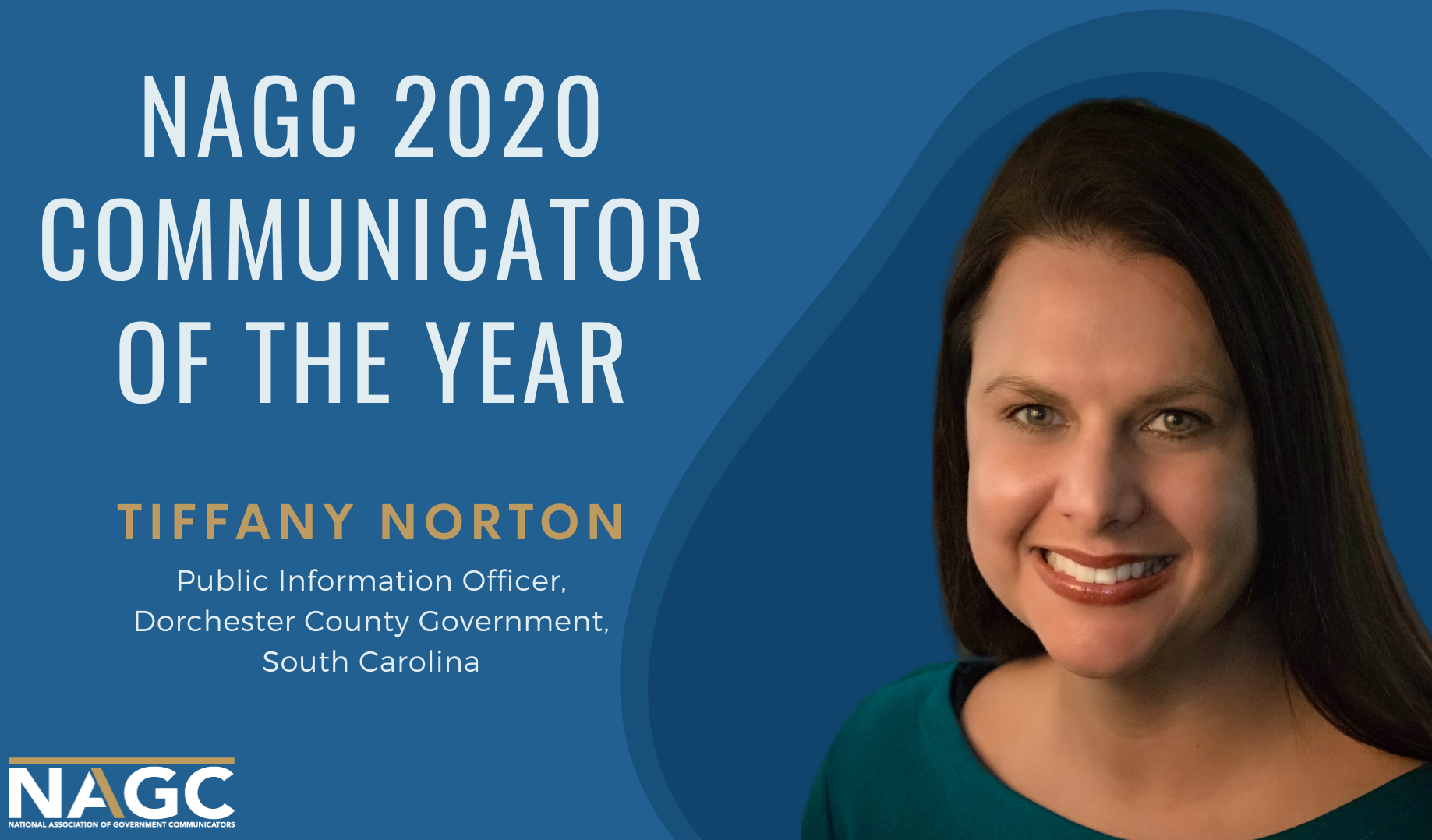 During a virtual awards ceremony held on Wednesday, May 20, 2020, The National Association of Government Communicators (NAGC) announced that Tiffany Norton, Public Information Officer for Dorchester County is the NAGC 2020 Communicator of the Year.

The NAGC Board of Directors selected Tiffany from a field of impressive nominees from federal, state and local government agencies. “Tiffany Norton’s integrated and synchronized approach to communication exemplifies the benefits of having such a talented communicator working in government. Her work helps ensure the right message gets to the right people at the right time via the right channel. It is that kind of effort that led to a finding in the 2020 Edelman Trust Barometer showing local/state government is more trusted than the federal government.”

She covers all issues and topics for the County of approximately 165,000 from significant weather events such as hurricanes, a helicopter crash, the passing of a long-standing elected official, a train derailment, road projects and public utilities. She is the County’s webmaster and manages multiple social media accounts across various platforms.

Additionally, she responds to all media inquiries, manages freedom of information requests, and authors all news releases.

During emergencies, Tiffany staffs the county’s emergency operations center and communicates on behalf of the County, municipalities, school districts and utilities to the media and citizens. She re-developed the county website and created the online newsroom, which won the county the J. Mitchell Graham Memorial Award in 2019 from the South Carolina Association of Counties. The J. Mitchell Graham is awarded annually to the county with the best new service. This was the first time Dorchester County has won the coveted award and the first time that public information has been recognized.

In her role, Tiffany also oversees the County's tourism marketing program. This includes creating and implementing a measurable tourism promotion and marketing plan. The South Carolina Lowcountry has an abundance of recreational resources. Often, destinations exhaust their efforts marketing beyond their borders, forgetting that there are plenty of potential 'tourists' in their own towns. To that end, with Tiffany’s leadership, Dorchester County is using a new out-of-home campaign, Do More Dorchester, to remind residents throughout the region that there's plenty to do right here in Dorchester County.

As Communicator of the Year, Tiffany joins a prestigious group of noted communicators who have exemplified the ethics of good communication and good government through their professionalism and superior performance in serving the people of the nation.

Dorchester County Administrator, Jason L. Ward said  "I congratulate Tiffany Norton-Cornette on being named the NAGC Communicator of the Year. NAGC recognized what we here in Dorchester County know. Tiffany is an excellent PIO and communicator."

Tiffany is a U.S. Coast Guard Veteran and holds a Bachelor of Arts in Political Science from the College of Charleston and a certification as a Public Communicator from Texas Christian University. She currently serves as the Vice President of Communications for the South Carolina Chapter of the Public Relations Society of America.